To say the last several months has been a challenge for farmers, especially dairy and livestock farmers, is the major understatement of the year.  Take low milk and commodity prices, add in record snowfall since late January, throw in several collapsed buildings, plus a late April snow storm, add a late spring and planting season, and now sprinkle in the realization that alfalfa and other perennial forages have suffered winter injury or worse winterkill and dairy and livestock farmers have more management obstacles to overcome.

Current reports are anywhere from 30 to 75% killed or injured alfalfa plants.  So, how did we get in this situation of so much death and destruction in the alfalfa fields?  A small percent can be related to management as cutting schedules, fertility management, age of the stand, and variety in the field can lead to some injury.  However, most of it is related to what Mother Nature dealt the alfalfa fields this winter. 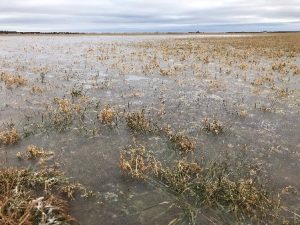 Two main weather events or patterns most likely contributed to the current winterkill and injury issue.  A late December rain event caused water to pond in low areas of the fields and freeze as a solid block of ice allowing little or no air to reach alfalfa crowns which suffocated plants in these areas.  Very little to no snow cover until the last week of January allowed soil temperatures to drop to lethal levels for alfalfa plants.  The University of Wisconsin Spooner Agricultural Research Station recorded soil temperatures as low as 13°F with temperatures holding for a week at 17°F.  Once snow arrived, soil temperatures rebounded to around 23°F. 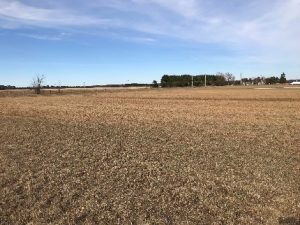 As alfalfa has, or should have, started to green up, now is the time to assess existing fields for winterkill and injury.  The only way to assess an alfalfa stand and individual plants is to dig them up.     Dig the plants from three or four representative locations in the field being sure to include the top six inches of the root. Examine the crowns for size, symmetry, and the number of shoots present. Then cut the root lengthwise and check for rot or discoloration in the crown and root. A healthy alfalfa plant should have a firm, white taproot with little to no brown discoloration.

Most alfalfa plants that were under ice this winter are soft, mushy, and dead.  If plants are beginning to green-up, check for symmetry in the crown.  An injured plant will have one side of the crown green and the other side brown or dead.  Another observation to make when the potential for winterkill is high is to not make the assumption that because the plants are green now that they will be productive all year.  If the root is more than 50% discolored or soft now, it may only green up and die or die after the first cutting.

So, what can we do to manage through the winterkill or injury?  If building feed inventory is the goal, then rotating to corn silage is the best option.  You can take advantage of the nitrogen credits from alfalfa for the corn crop and hope for good silage yield.  If hay or high protein forage is needed, consider a small grain/field pea mixture for early forage.  The sorghum/sudangrass options can work however drying can be an issue and warmer temperatures are needed for good yields.

Inter-seeding another forage into the existing alfalfa stand is also an option if the goal is to keep the stand for this year and rotate out next year.   Crops such as cereal grains (oats, beardless barley, wheat, triticale), annual and perennial ryegrasses, and sorghum-sudangrass can be inter-seeded to bolster yield for the growing season.

Another option is to consider harvesting the first crop and then planting corn.  The risk here is getting precipitation after the first cut harvest.  Also, crop insurance can be unavailable with late corn planting.  UW research has shown corn planted as late as July 1 still out yields many of the alternative forages.

The 2019 crop management year is to be a challenging one and now add in the high potential for winter injury to alfalfa.  Management of alfalfa fields and forage inventory will play a major factor in animal performance and farm profitability.  University of Wisconsin –Madison Division of Extension has resources to help you manage through winterkill/injury and forage inventory available at the Team Forage website https://fyi.extension.wisc.edu/forage/altforage/   or contact your local county UW-Madison Extension Agriculture agent/educator.

We teach, learn, lead and serve, connecting people with the University of Wisconsin, and engaging with them in transforming lives and communities.

Connect with your County Extension Office »

Find an Extension employee in our staff directory »

An EEO/AA employer, University of Wisconsin-Madison Division of Extension provides equal opportunities in employment and programming, including Title VI, Title IX, the Americans with Disabilities Act (ADA) and Section 504 of the Rehabilitation Act requirements.