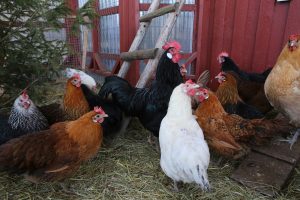 There have been several confirmed cases of highly pathogenic avian influenza (HPAI) in eastern Canada and in a number of U.S. states. Several wild ducks and one commercial turkey flock have tested positive for the virus in the United States. Outbreaks in Canada have affected both commercial and exhibition poultry flocks.  Wild birds infected with the virus likely comingled on their breeding grounds in the Arctic last summer, with some migrating through Europe and others to North America.

Outbreaks of HPAI can have devastating impacts. Many will remember that in 2015 the U.S. poultry industry suffered from HPAI outbreaks. More than 200 poultry flocks in several states were directly affected, and more than 50 million chickens and turkeys either died from the disease or were euthanized to stop the spread of the virus. Many countries enacted trade embargoes, so exports decreased greatly. Breeding flocks died, limiting replacements for several months afterward. Increased biosecurity efforts added greatly to production costs as well. The total impact on the U.S. economy has been estimated at $3.3 billion, including costs from lost production, indemnity payments, federal veterinary staff hours, etc.

What should poultry producers do now? Prevention is key, so a strong biosecurity program is most important. Because wild birds may be carrying the virus, growers should minimize interactions between wild birds and domestic poultry flocks.

Outdoor access carries some risk of exposure. If domestic birds are allowed outside, there are steps that can decrease that risk. Covered pens to keep wild birds out can help. Keeping feed and water inside can make the range less attractive to wild birds. Eliminating standing water areas or fencing them off from flocks are other ways to limit exposure to wild birds.

If domestic birds are housed indoors, care should be taken so that humans do not carry the virus in. Changing footwear before entering, disinfecting shoes, cleaning equipment, etc., are all helpful. The HPAI virus can spread by bird feces, so care should be taken to avoid tracking it into coops.

Watch for signs of disease. Poultry growers should monitor their flock for signs of disease. Sudden deaths, unusual swelling, and purple discolorations are common signs of HPAI. Signs like these in multiple birds should be reported immediately to USDA APHIS at 1-866-536-7593. More information on biosecurity and HPAI is available at this website:

We teach, learn, lead and serve, connecting people with the University of Wisconsin, and engaging with them in transforming lives and communities.

Connect with your County Extension Office »

Find an Extension employee in our staff directory »

An EEO/AA employer, University of Wisconsin-Madison Division of Extension provides equal opportunities in employment and programming, including Title VI, Title IX, the Americans with Disabilities Act (ADA) and Section 504 of the Rehabilitation Act requirements.